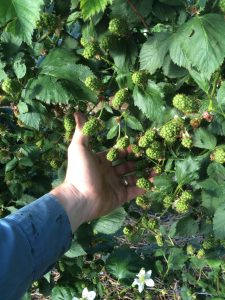 With June upon us it won’t be long before we will open our You-Pick again here at Elderslie. We are terribly excited to enter into a berry season again with you all. Signup should begin June 16th with our first anticipated picking being on the 20th. Signup (on the website) is required, pails are provided and the cost is $14 per 2.2-quart pail. We hope you will join us.

This year is significant for a few reasons. In 2014 and 2015 from various causes our crop was very disappointing. In 2013 we closed the You-Pick in August after a bountiful season when rains set in and over the month dumped 18 inches of water, or about 450,000 gallons, on our little bramble below the main house and above the west fork of the Chisholm Creek. In 2014 we lost our crop but not our nerve as plans began for a new and better bramble.

Through the winter of 2014 and 2015 many of you watched as we dug in irrigation lines, sunk fence posts, and plotted the Longfield Bramble. April of 2015 was a wonderful and tragic month as we had to acknowledge that we lost another year’s crop, and we took delivery of 1000 little sticks that held the alchemy that is a dormant plant.

2015 saw a great season in our Bramble Cafe, which used all of the small crop that we did have. We saw the beginning seeds of expansion for the Cafe take root and stick as the berries at Longfield grew. Summer 2015 ended in caring for the young plants and preparing for 2016. It was an eventful summer mowing radishes and trying to keep the torrential rains from drowning the young planting.

Next year, next year, always the hope and foolishness of farmers – but it is what keeps us going. Winter 2015 was consumed with wondering. Wondering if there would be a 2016 crop, wondering if Longfield would produce or if we would slip into another year of loss. Through many toils I wondered. But after two years, we have a crop.

To hope is one of our most necessary actions as human beings, and one may never give up hope simply because of failures. While 2016 could still slide into loss through many natural causes yet this year, I am hopeful that we will have a berry year to wash away the memories of loss, complete with the divine and simple joy of small feet and small voices lifted in laughter and joy as the harvest is brought in.