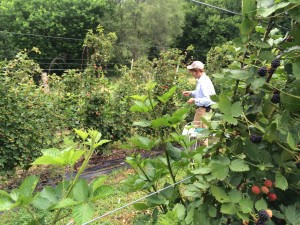 The thorny varieties of blackberries are clinging to their leaves like the old curmudgeons that they are. The younger varieties of thornless canes, bred for a less brutal age, are largely bare with bulging fruit buds, casting their hope almost entirely on the future. As winter descends upon us we thought we would take a moment and look back, and another to look forward. It is impossible to look back without gratitude to those who chose Elderslie, and gave us the opportunity to serve. We extend our thanks for what has been, and the invitation to share in what will be. 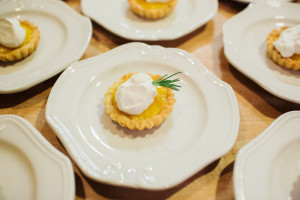 Spring 2015 was bittersweet as the failure of the blackberry crop became evident by early May. We had little time to mourn before we plunged into decadent short ribs, some lovely kale, and an intoxicating lemon custard with rosemary finish as the Farm Dinners opened our season.

Summer of 2015 dawned wet, wet, and more wet. There were days I watched farm hands picking tomatoes when their shoes would disappear into the mire with a slimy sucking sort of noise as they trudged down the saturated rows picking beautiful ripe, though wet, red, yellow and cherry tomatoes. Despite the rain and the paucity of berries this year the Bramble Cafe was open and served a lovely selection of breakfast items, hot coffee, and a pleasant view over the bramble and Chisolm Creek.  We look forward to opening the cafe Memorial Day weekend, and farm dinners will take place in the early spring with a new kitchen and improvements to our seating areas both outdoors and in. 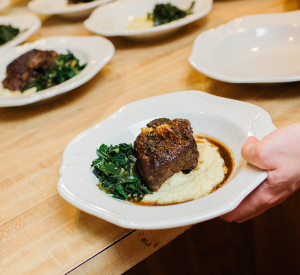 Fall of 2015 capped the year with a golden brown crust on the Farm Dinner pork belly topping the risotto like the mellow light of fall spilling over the low plateau hills of northern Kansas. Fall saw the maturation of a full crop of blackberry canes that, should they survive winter’s torments, promise a wonderful season for berry-picking in 2016.

Elderslie Sawmill and Fine Woodworks
The woodworkers are hard employed in the fabrication of elements and finished products. Our inventory of live edge slabs is building with end uses this year to include bar tops, coffee tables, dining tables, and stair treads. Logs have been harvested from around central Kansas; it promises to be another great year with burr oaks coming from Belleville, walnuts from Douglas, silver maple from near Whitewater, and a massive sycamore bole from the city of Wichita.